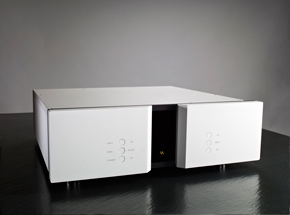 The SP-101 replacement has arrived. After spending a very long time developing the new two chassis MP-P201 extreme phonostage, it was clear that a serious look at a replacement for he SP-101 was needed.

In the development of the MP-P201, we did not expect that the improvement in performance would be so dramatic, but all the hours of refining, even the smallest

of parts, really paid off in an unimaginable way. As a result, the SP-102 is not an upgraded SP-101.

It is a brand new design based on the technologies gained through the development of the MP-P201. It therefor incorporates the same features for setting, both loading and sensitivity via our RC-010 systems

remote or directly from the front. Instead of the normal MM/MC selection, we implemented a very flexible gain setting feature. The actual setting correlates to the output voltage of the cartridge being used. To be as flexible as possible, we scanned the market for all the different types of cartridges we could find, simply to allow the resolution of the gainsteps to be as optimal as possible.

The result gives perfect matching with output voltages ranging from 125uV - 10mV. Together with our well known true balanced, full discrete technologies, we believe the SP-102 together with the MP-P201, sets a new standard for analogue reproduction